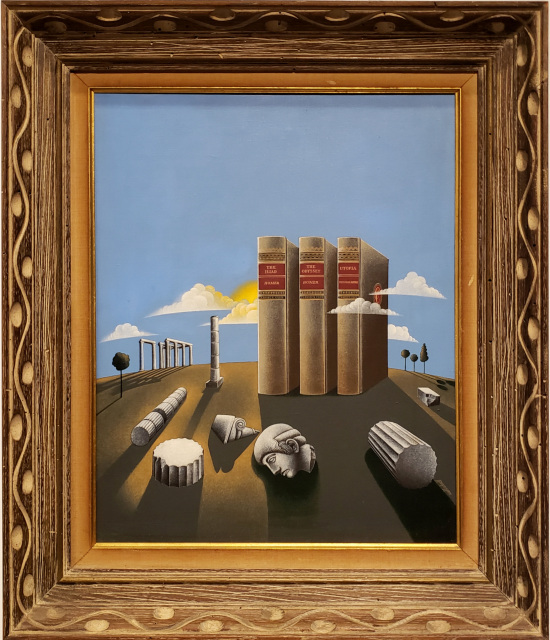 De Chirico style landscape with collapsed monuments and monumental books, including Homer's The Iliad and The Odyssey and Thomas More's Utopia painted by Roger Hane in the 1970's. Oil on canvas. Signed bottom right.

Roger T. Hane (1939–1974) was an illustrator of paperback books, commercial advertising campaigns, and record albums, known for his surreal, fanciful art. During his eleven-year professional career, Hane produced over three hundred illustrations. He painted the covers of the Collier-Macmillan editions of C.S. Lewis's Chronicles of Narnia books, as well as such Simon & Schuster publications as Carlos Castaneda's The Teachings of Don Juan and A Separate Reality. He also created artwork for Avon Books, E.P. Dutton Company, and Collier Books.

He studied at the Maryland Institute of Art, and graduated from the Philadelphia Museum School of Art (now The University of the Arts) with a degree in advertising design in 1961.

In 1963, Hane was hired to do a full-page illustration for Esquire magazine; he moved to New York in 1965. He married Elaine Miller in 1964. Among his many magazine clients were Ladies Home Journal, Life, Esquire, Sports Illustrated, Fortune, New York magazine, Redbook, The Lamp, Look, Vista, the Saturday Review, Travel and Leisure, Look, Sylvania, Ramparts, the National Lampoon, and Playboy.

Hane died in New York City at age 36 as a result of a robbery and beating in Central Park.

Mr. Hane was posthumously awarded the New York Artist Guild’s Artist of the Year Award in 1974, and his work was featured in the Society of Illustrators’ 1977 publication. The Philadelphia College of Art gives an annual Roger T. Hane Memorial Award to the student with the year's top illustration portfolio.