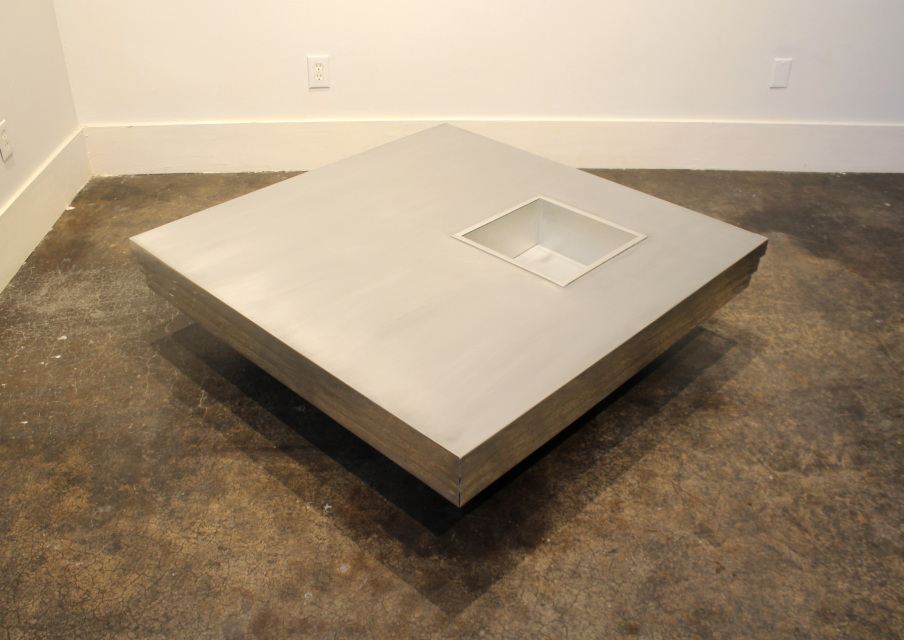 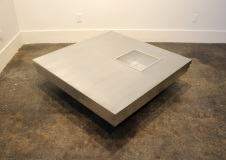 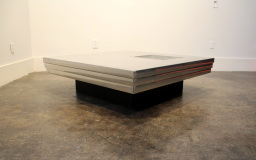 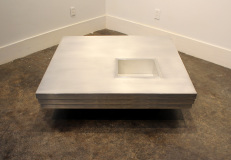 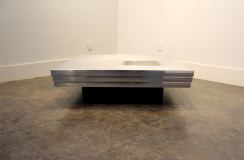 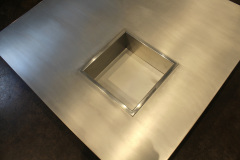 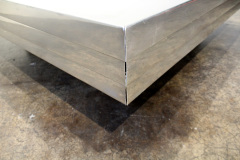 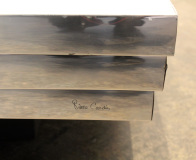 Square steel and chrome coffee table designed by Pierre Cardin. Mirror polished stepped chrome banded edge (with engraved signature "Pierre Cardin") above a black recessed platform base. The top is brushed steel with a satin finish and has a 13" square inset (can be used as a planter, to chill bottles, or hold magazines). Beautiful minimal piece with lots of presence.

Best known for creating groundbreaking fashion designs from the 1950s onward, Pierre Cardin has enjoyed great success in other design fields, most notably furniture. Cardin’s chairs, cabinets, tables and other pieces share many of the keynotes of his clothing designs. They are simple, geometric, elegant and cool. Cardin was born in a village near Venice, Italy, and raised in central France. Always interested in fashion, he left home at age 17 to train with a Vichy tailor. After the end of World War II, Cardin moved to Paris and worked for a succession of couture houses, before taking a job with Christian Dior in 1946. Cardin went solo in 1950, and quickly won attention for his novel style. Unlike Dior’s famous New Look, Cardin’s clothes de-emphasized a woman’s curves; his breakthrough pieces like the Bubble dress had, instead, a sculptural quality. In the following decade, Cardin introduced bright tunic dresses and shifts, marketed as the Space Age look and accessorized with vinyl hats and visors. In the 1970s Cardin expanded his design work into furniture, jewelry and automobiles. (Later, licensing agreements would put Cardin’s name on goods ranging from perfume to sunglasses.) Cardin’s furniture pieces — inspired, perhaps, by the rediscovery of Art Deco design in that decade — feature simple, symmetrical forms, lacquer and figured veneer finishes, and accents in metals such as aluminum and brass.